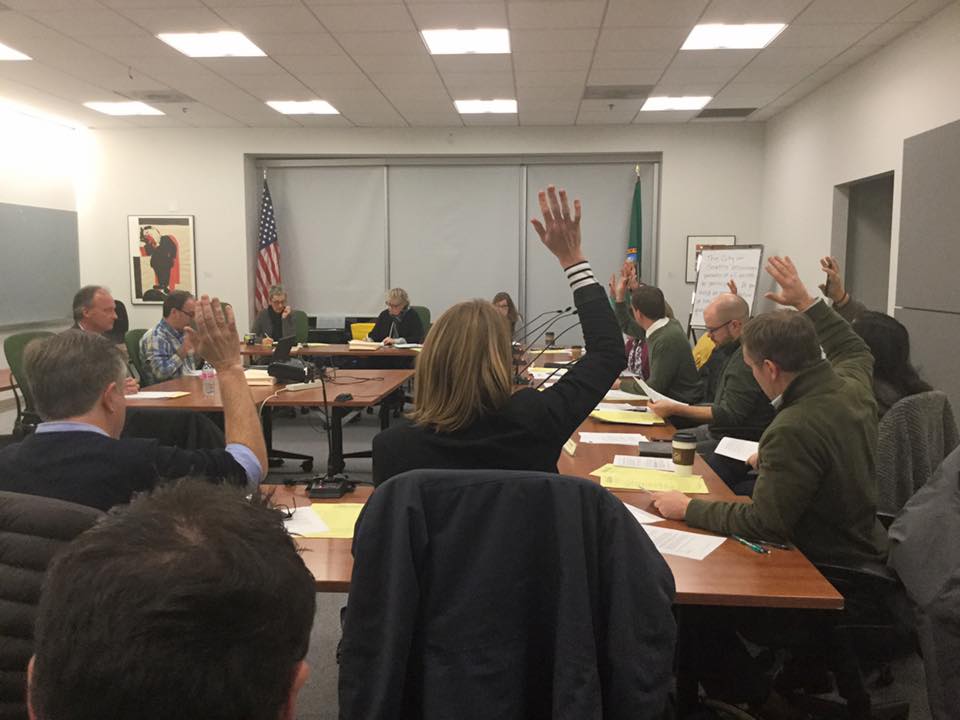 The City of Seattle Landmark Preservation Board last night unanimously voted to accept the nomination to designate Belltown’s iconic Mama’s Mexican Kitchen as a City Landmark (for background, see Seattle Times story here). The Board will next be scheduling a second public meeting to decide whether to formally designate the building as a Landmark or to deny it protected status.  That meeting will likely be held in January or February.

The nomination was actually what we call an “anti-nomination,” which is one that has been prepared by developers that wish to tear the subject building down.

The meeting began with a presentation led by the developer’s attorney, Jack McCullough, whom the Seattle Times called “one of the top land-use lawyers in the region.”  Mr. McCullough argued that the building was an unremarkable building in poor condition and that it didn’t meet the Landmark standards.

The developer’s architectural consultant spoke next, stating that the building is in poor shape and has been altered too much to qualify as a City Landmark. He also showed slides of similar buildings in Belltown — such as the building that houses the 5-Point — stating that these types of commercial structures are common not ony in Belltown, but throughout the country.

During the public comment period that followed, Friends of Historic Belltown rigorously defended the building, noting that Belltown doesn’t have many fancy buildings, but rather that the community’s history is with working buildings for “the common man,” and that the Mama’s building embodied that history.

Brooke Best, Preservation Advocacy Coordinator of Historic Seattle, also argued in favor of the nomination, noting among other things that the building is adjacent to the Wayne Apartments, a City Landmark that was built in 1890.  That building was Landmarked after  the community rallied to protect it in response to a plan by developers to tear it down to build a 124-unit building on multiple parcels that contain the Wayne Apts and a string of Belltown’s favorite bars and restaurants, including the Lava Lounge, Rocco’s Pizza, Shortys, The Rabbit Hole, Clever Bottle, and Tula’s Jazz Club.

David Levinson — a member of the Belltown Community Council and longtime Belltown resident — stated that the restaurant portion of the building has been a gathering place for the community for decades, describing how members of Belltown’s once large labor union community likely met there regularly.

Evan Clifthorne — executive director for Project Belltown — urged the Board to move the nomination forward to a full vote.

No one spoke against the nomination other than the applicant’s representatives.

After public comments, the Board began deliberations, and it soon became apparent that the Board was much more in agreement with the community than with the developers.  One after another, Board members noted that the building is definitely more than the run-of-the-mill throwaway depicted by the developer’s legal and consulting team. While some noted the building’s alterations, all felt that much of the building remains remarkably intact.

We are so happy and thankful that we have a Landmark Board that listens to the community and to the facts and the law, rather than bowing to pressure from developers.

And we’re also happy and proud to be part of a community that cares about its historic buildings.  THANK YOU TO ALL that attended the meeting and/or submitted comments via email!!!!!

And while we feel a bit bad for the developers, who had been working with the community to design a proposed development that fit in with the neighborhood, they really should have looked into the historic value of the building before they paid $4.5 million for the property.   It’s like buying property with a wetland and eagle’s nest on it — you can’t simply bulldoze it just because you didn’t know those features have public values that are protected by law.

We’re elated that the Board saw things the same way we do, and we’re looking forward to the next round — the Mama’s Superbowl – to establish our second Landmarked building on “the block.”